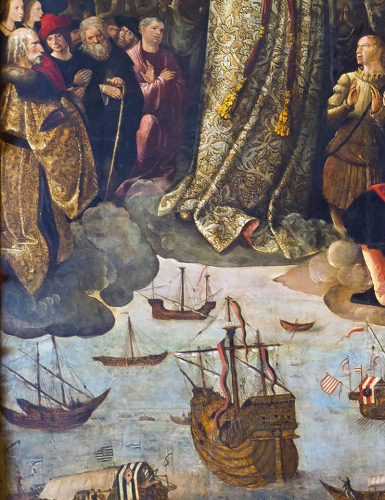 Our Lady of the Voyagers. Photo: VIQUIPEDIA

Historian Jordi Bilbeny’s latest book on Columbus claims he was a Catalan noble born in 1414
Christopher Columbus, the discoverer of America, was in fact the Catalan noble born in Barcelona, Joan Colom Bertran, according to the historian from Arenys, Jordi Bilbeny. In his latest book on the issue of Columbus’s origins, which was recently published by Librooks, Bilbeny, who had already identified Columbus as Admiral Joan Colom Bertran, now deals with the birth date of the aristocrat, soldier and navigator born into Catalan high society. Bilbeny sets the year of his birth as 1414, which would obviously mean his discovery of the Americas took place when he was 78 years of age, and that he died aged 92, in 1506.

The fact that this timeline would have Columbus visiting America between 1502 and 1504, at  almost 90 years of age, is not a problem for Bilbeny, who refers the reader to various historical sources describing the discoverer at that time as a “venerable” old man with white hair who spent the end of his life almost prostrate in bed because of the diseases that affected him and who, for example, had to beg the king’s permission “to travel on a stretcher”. In fact, Columbus compared himself to the figure of the biblical Abraham, who died at more that 100 years of age. The writer also lists a number of people who at the time lived to a very old age, including Catalan philosopher Ramon Llull.

Bilbeny explains that despite the current belief that people in those days lived far shorter lives than we do today, there are many well known figures who in fact lived to a ripe old age. Apart from the aforementioned Ramon Llull (84), he gives the examples of the Bishop Joan Margarit (86), artist Michelangelo (89), Papa Luna (95), Pope Gregory IX (98) and Ramon Penyafort (100).

So how does Bilbeny arrive at his conclusions? The writer is well known for his research into the great navigator and so far has produced nine works in various formats on different aspects of the admiral’s life. If in fact he was the Catalan Joan Colon i Bertan, then he is mentioned in his grandfather’s will as Joanet in 1419. There are also records of his logs at sea giving specific dates, as well as records relating to legal disputes with the Crown and the Admiralty, as well as lawsuits following his death.

The Catalan theory does of course have competition, and Bilbeny has dealt with this in his previous work. The strongest contender is an Italian, the Genovese wool merchant Cristoforo Colombo. However, to Bilbeny, it seems unlikely that such a man with no education, military or naval background, and most especially bereft of aristocratic lineage, could come near the profile of a man who had access to the court and was a respected naval officer. The timeline does not fit either, because the historian has Colom Bertran fighting in the Catalan civil war alongside Renat d’Anjou, king of the Catalans, when Italian documents have Columbo working as a weaver with his father.

For Bilbeny, the final nail in the coffin of the Columbo claim lies in the fact that previously recorded details of his life only coincided with the life and exploits of the great man because they were “forcibly altered” to make an impossible story possible.